What Accelerates a Community of Practice? Inflection Points That Changed the Course of the Math in Common Initiative

Establishing professional communities of educators from districts and schools has gained popularity as a mechanism for collaboratively thinking through and enacting change in education. Modeled on successful practices in business and healthcare, education-focused networks embody the belief that "learning is better together" (Bryk, Gomez, Grunow, & LeMahieu, 2015) -- that a group of organizations or individuals can learn more quickly and effectively by working together than by working in isolation.

In 2013, 10 California school districts received grant funding from the S. D. Bechtel, Jr. Foundation ("the Foundation") to participate in the Math in Common (MiC) initiative to support implementation of the Common Core State Standards for Mathematics (CCSS-M) (NGA Center & CCSSO, 2010). The districts were located across the state, ranging in size and characteristics, from large urban districts to small rural districts. A portion of the grant funding to the districts was dedicated to enabling their participation in a community of practice (CoP) to "share lessons learned with each other [about implementing the CCSS-M] and participate in learning communities to share instructional materials and best practices" (S. D. Bechtel, Jr. Foundation, 2012).

Rather than creating a "networked improvement community," whose collaborative work is driven by a very targeted and specific common problem of practice or improvement aim,1 MiC organized its CoP around collective learning about mathematics standards implementation in a very broad sense.

The trajectory of the MiC CoP was guided by the convening organization, California Education Partners ("Ed Partners"), in response to direct engagement with the districts and their perceived needs over the course of the initiative. WestEd worked alongside Ed Partners and the districts, using evaluation findings to help hone the CoP's focus, ensure that the work was data-driven, and support capacity building. Figure 1 shows the participants in the MiC CoP.

While it is difficult to condense the rich array of the initiative's activities into one linear timeline, it does seem that the initiative can be divided into two fairly distinct phases. This report describes how the MiC CoP gradually honed its focus over the first five years of the initiative. It begins by describing actions taken early in the initiative that laid important foundations for the CoP. During this first phase (2013-2015), Ed Partners devoted significant effort to developing the structure of the CoP, offering a range of potential focal ideas to the CoP, and building trusting relationships across the districts. The report's discussion of the second phase, building on these earlier efforts, highlights what we have identified as the seven most significant inflection points -- that is, points where the trajectory of the MiC CoP changed. These seven inflection points resulted from lessons learned from the earlier years and, in most cases, led to more productive collaborative work in the later years of the initiative, when work shifted from thinking broadly and generally about implementation to focusing far more specifically on classroom instruction and on how to achieve the mathematics instruction that districts were hoping for under the CCSS-M.

Rather than providing a "how to" manual for CoPs, we intend for this report to describe the trajectory of the MiC CoP, including both its missteps and its successes, in the hope that designers or participants of other formal or informal CoPs can leverage the MiC experience and make progress more quickly in their own collaborations. 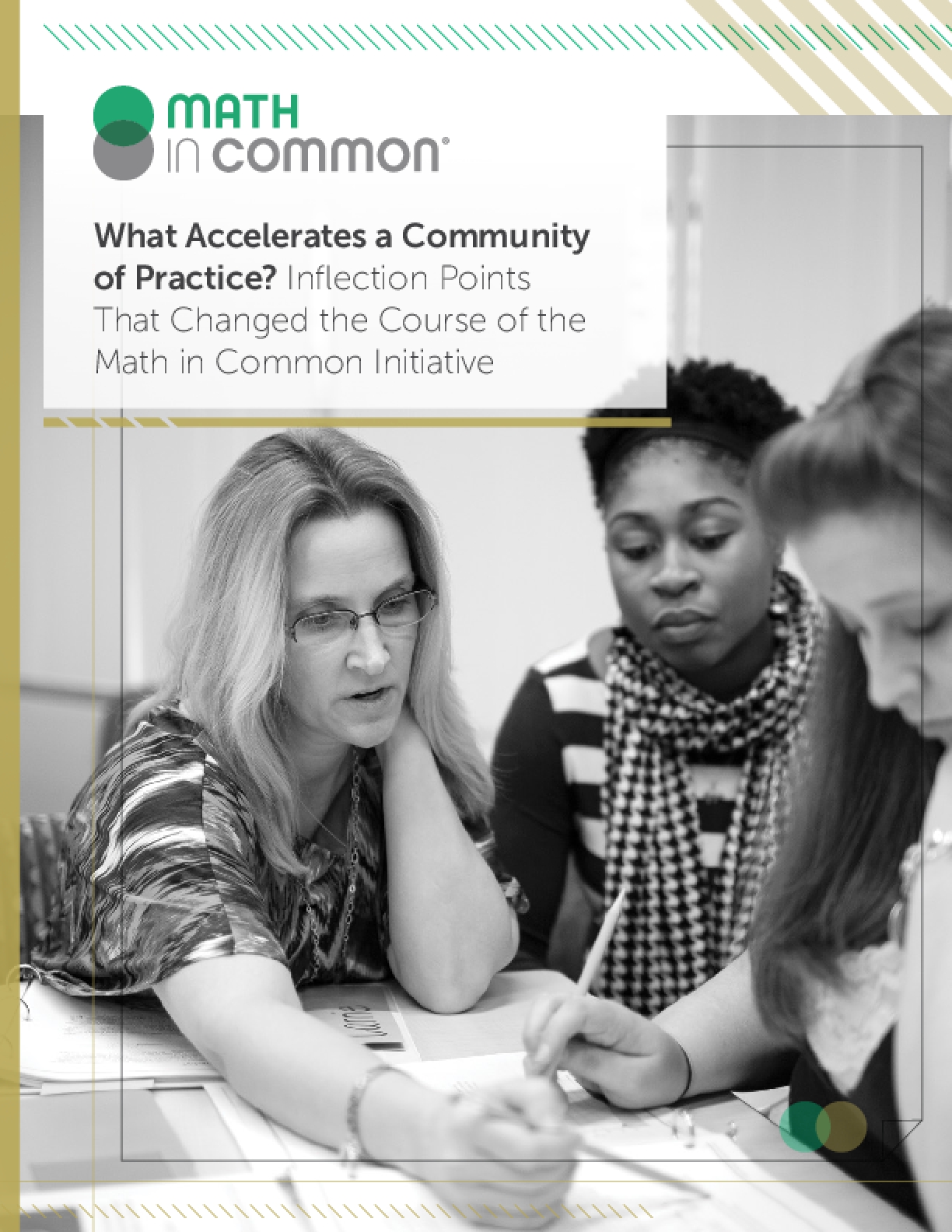