The Tackling FGM Initiative: Evaluation of the Second Phase (2013-2016)

The Tackling FGM Initiative (TFGMI) has been working since 2010 to strengthen the prevention of Female Genital Mutilation (FGM) at community level. There were two phases of the TFGMI – Phase One from 2010-2013, and Phase Two from 2013-2016. Over the course of both phases, 51 organisations were funded with a total of £2.8 million invested. This evaluation report focuses on results achieved in Phase Two.

Phase One of the Initiative produced a clearer understanding of 'what works' for community-based prevention of FGM in the UK context. This included working with women affected by FGM as 'community champions' to amplify the voice of survivors and people from affected communities, religious leaders and young people, and raising awareness of the health, and other harms of FGM, as well as the UK law. Gaps identified at the end of Phase One included the need to: strengthen rights-based approaches to ending FGM; further access isolated communities; enhance comprehensive responses to FGM by strengthening relationships with statutory agencies.

In addition, within the TFGMI a small grants programme was initiated with funding from Comic Relief. This aimed to widen the impact of the TFGMI into further geographic areas, building on what had been learnt under Phase One.

Overview of Programme Aims and Objectives:

Both the Tackling FGM Initiative small and large grants programmes aimed to achieve the overall aims which were;

The objectives of the TFGMI Large Grants Programme for Phase Two were:

1. To strengthen work which promotes a rights-based approach to tackling FGM among affected communities.

2. To undertake awareness-raising work with target audiences using the most effective messages for that group.

3. To reach those who are most resistant to work which tackles FGM or those who don't normally access services or engage in community activities.

4. To increase the skills and capacities within affected communities to speak out against FGM.

5. To strengthen the capacity of community groups to engage with statutory agencies so that prevention of FGM among women and girls at risk in the UK is mainstreamed as a form of child abuse and violence against women.

6. To strengthen the network of groups active in tackling FGM and work with policy-makers and partners locally contributing to a broader campaign to end FGM in the UK.

The small grants programme had an additional four objectives, but these were subsumed into large grant objectives due to their similarities:

- Grassroots organisations and activist groups become more skilled in engaging with, and in lobbying the range of relevant statutory bodies for appropriate responses to the issue (Objective 5 of the large grants programme).

- A more cohesive, more unified movement that embraces a range of stakeholders (small and larger groups) sharing learning and good practice in addressing this issue. (Objective 6 of the large grants programme).

1. In addition, a specific aim of the small grants programme was to "reach more communities in more geographical areas and that more sections of these communities are reached, increasing the movement to stamp out FGM in the UK.' 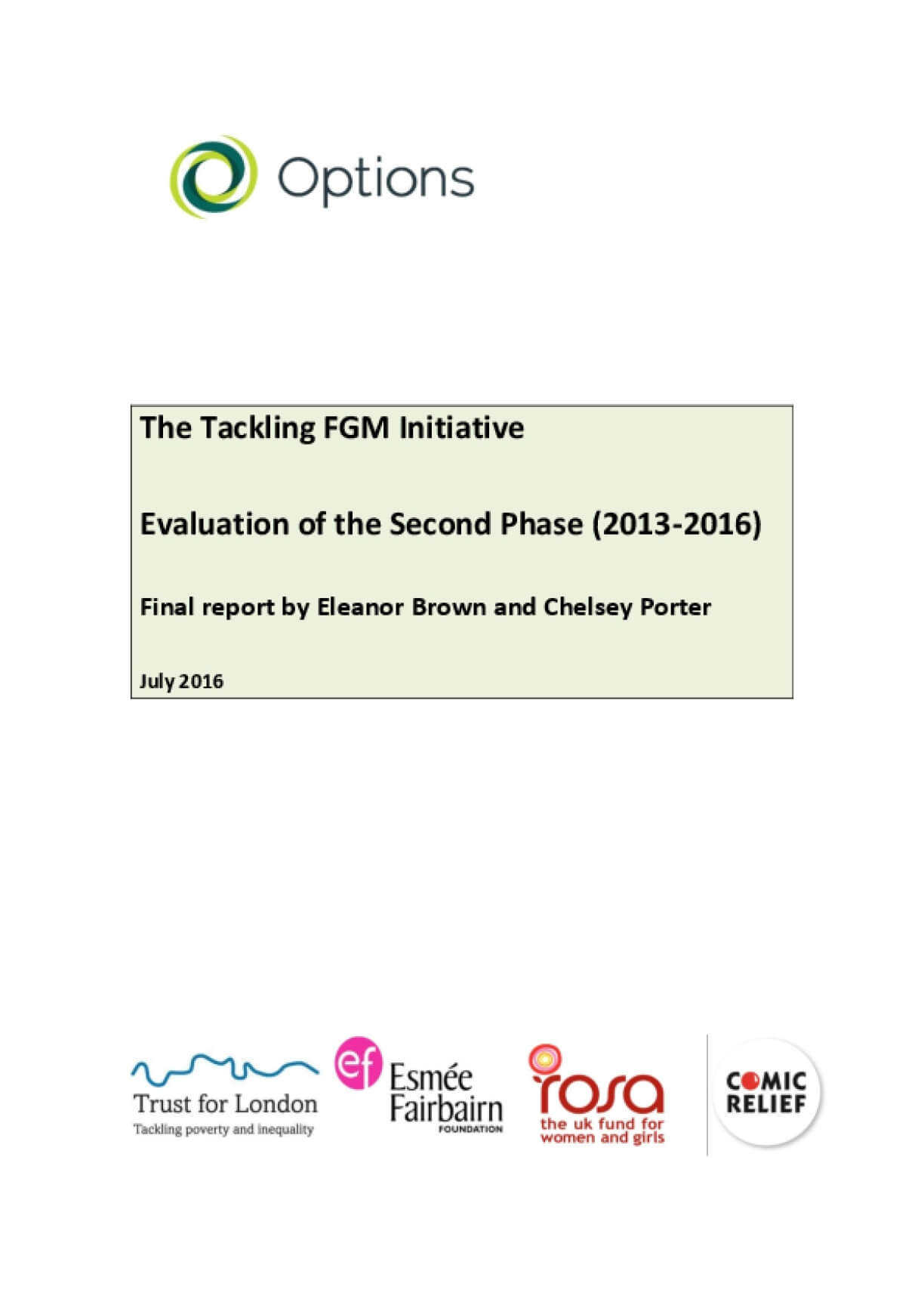