Damage from hurricanes is soaring off the charts, bankrupting insurance companies and depriving property owners of insurance in high-risk areas. During the 1960s, worldwide damage from windstorms with economic losses of $1 billion or more totaled just $4 billion. In the 1970s the figure rose to $7 billion, and in the 1980s it topped $24 billion. Next came the 1990s, when hurricane losses soared to $113 billion. Then during the six years from 2000 to 2005, hurricanes left a staggering bill of $273 billion. (See data at http://www.earthpolicy.org/Updates/2006/Update58_data.htm) Two trends are largely responsible for the growing costs of windstorm disasters. One, rapid coastal development is bringing more people and more expensive infrastructure into vulnerable areas. And two, hurricanes (called typhoons in the western Pacific) are growing stronger and lasting longer, fueled by higher sea surface temperatures. They are also widening their geographic range, invading areas previously considered safe from the wrath of windstorms. Last year was the worst ever for storm-stricken areas and the companies that insure them. Losses from the eight major storms of 2005 exceeded $170 billion, half of which was insured. Three of the storms were in the Pacific, but the Atlantic storms racked up 98 percent of the economic costs. The unusually long North Atlantic hurricane season that extended from June into the New Year brought a record 28 named storms, taking us through the alphabet and into Greek letters. This is nearly three times the average annual number of storms over the past century. Fueled by high surface water temperatures, four hurricanes -- Emily, Katrina, Rita, and Wilma -- reached maximum strength, the highest number of Category 5 storms ever in a single season. Hurricane Katrina, which struck the Gulf Coast of the United States in late August 2005, was the most financially devastating storm on record, with damages from winds and the record storm surge exceeding $125 billion. Although Katrina reached top wind speeds of 175 miles (282 kilometers) per hour, it had weakened to Category 3 by the time it hit the U.S. Gulf Coast. Powerful Rita's arrival a few weeks later marked the first time two Category 5 storms developed in the Gulf of Mexico in one season. Then came Wilma, which devastated parts of Mexico's Yucatan Peninsula and went down in history as the most intense Atlantic storm ever. Storms in 2005 were not only strong, they were more widespread. Hurricane Vince, which struck Spain in October, traveled farther north and east than any Atlantic tropical cyclone. A month later, Tropical Storm Delta also moved into uncharted territory for Atlantic hurricanes, crossing the Canary Islands. Stronger storms in unexpected places, like these and Brazil's 2004 Hurricane Catarina, the first hurricane recorded in the South Atlantic, are prompting insurance companies to rewrite their catastrophe models. 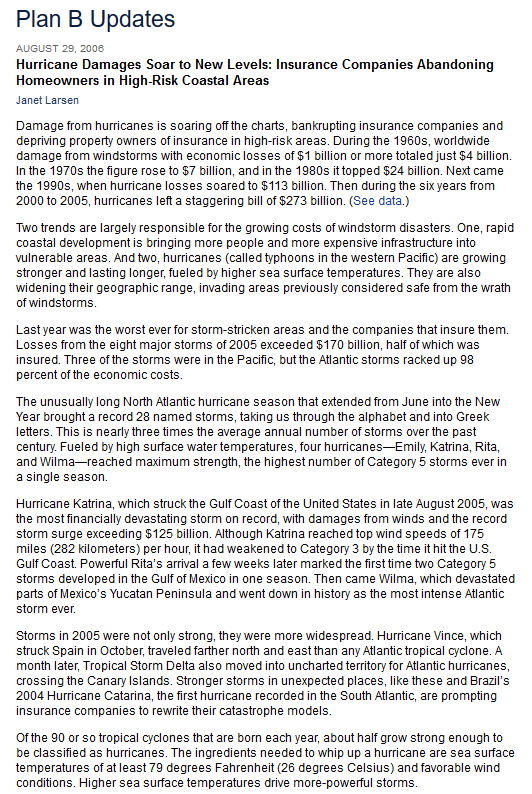